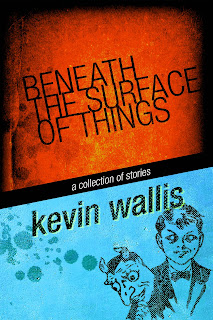 A homeless man trapped in a hell of his own making finds a reason to hope in “Redemption Song.”

A camping trip turns into a race for survival after the discovery of a bizarre artifact in “The Taking of Michael McConnolly.”

A man begins to question his sanity as patrons at a cafe begin to vanish one by one in “Charlie’s Lunch.”

Over two dozen exceptional tales of terror from one of the emerging voices in the genre.

“The Taking of Michael McConnolly” was named an Honorable Mention by Ellen Datlow’s Best Horror of the Year.

“An impressive, often unnerving, and always gutsy collection, Beneath the Surface of Things easily marks Kevin Wallis as a writer to Beware of with such stories as Redemption Song and No Monsters Came That Night. Every story showcases Wallis’ determination to break through the so-called boundaries of dark fiction and explore disturbing and sometimes even eye-opening new worlds, some without, but most within. You owe it to yourself to look Beneath the Surface of Things.”

The following excerpt is from the short story The Taking of Michael McConnolly.

As a kid, Michael McConnolly once rode an elephant at the circus. That may seem trite in the midst of a tale such as this, but as Brent and Mark rattled the earth with ear-shattering snores beside me—I wouldn’t be surprised if they had placed a bet on who could disrupt my sleep the most—I found myself thinking of this. He first told me of his elephant adventure as he and Mark lay sprawled across my college apartment’s floor after a Pearl Jam concert many years ago. The story had struck us just as the night’s beer consumption reached that critical point when perfectly timed gas and the lamest of jokes can double you over. And his elephant story—I even got a certificate!—damn near killed us. With the remnants of our cigarettes’ smoky trails hovering above us, we laughed until the alcohol clubbed us into the sleep of the drunk.

I tried to hear that laugh again—Mike’s natural, easygoing chortle. But my mind couldn’t find the tears of mirth that coated his face that night. All I heard was that other laugh, the one he had taken to his tent. My brain turned off the sound—protecting me, I guess, from what was to come—and I finally drifted into a restless sleep convinced he had been sobbing instead.

I first thought he said “Light’s on,” like some drill sergeant who’d lost the stomach for any stereotypical Hollywood screaming.

Hearing him that time, I rubbed sleep from my eyes and kicked my sleeping brothers. Their snores morphed into angry, lionish growls, but they sat up with a few more well-aimed shots of my foot.

“How you guys ever got laid, much less married, with noises like that, I’ll never know.” Blank looks met my quip, so I said, “Mike’s gone. Zeke sounds worried. We better see what’s up.”

Five minutes later, with coats and boots clumsily donned and bladders hurriedly emptied, the six of us—my brothers and I, Zeke, Brody and Dan—stood by Mike’s empty tent. Zeke handed me the note he’d found taped to the outside of his own tent when he’d come outside to take a leak a few minutes before waking up the rest of us.

Something saw us take the amulet and it’s pissed.

It was written almost illegibly, a vast contrast from Mike’s usual neat, almost girlish script. A few inches down, he had scribbled some more, repeating his lunatic message from the campfire.

We’re not the ones. It doesn’t belong to us.

“Amulet?” Dan asked after I read the note aloud. “He probably doesn’t even know what an amulet is.”

“So where’d he go?” Brent asked. More than anyone, he seemed annoyed at the interruption of his beauty sleep.

The cry of the ivory horn answered him. It howled through the trees from the east side of the woods like a grief-stricken mourner. Our heads whipped towards the sound, then to the branch from which we’d hung it earlier. The branch was empty.

“To call us for help,” Mark said. “He knows something we don’t.”

We snatched flashlights, donned headlamps. Mark grabbed his GPS-equipped phone, and we took off through the forest. The beams spasmed ahead of us like strobe lights. I remember thinking that I was glad none of us had epilepsy, lest we start seizing from the light show. If I had known of the bloodshed to come, I would’ve saved my thoughts for something other than whimsical wandering.

We reached the clearing where we had first found the Geocache in what seemed like seconds, although the hike earlier that day dictated that we must have been running for at least ten minutes. Except for the small-as-a-jockey but strong-as-a-racehorse Dan, none of us were exactly Olympians anymore—weekend warriors and beer-league softballers at best—so several more moments passed before we caught our wind enough to look around. Our breath fired into the cold air in visible puffs of exhaustion.

Even in the darkness, I saw that he was right. It spattered the ground at our feet, dotting dead leaves, streaking fallen tree trunks. Our lights illuminated crimson until it glowed against the backdrop of the woods. Under the raised tree root where we had first uncovered the Geocache, the wooden box lay smashed into countless shards that looked like teeth floating in a puddle of bloody rainwater. The necklace was nowhere to be seen.

Mark put his hand on my shoulder and squeezed until I had to bite my lip to stifle a grunt of pain. “What the fuck, Mike?” he said, more to himself than to me. “What the fuck?”

I shone a light upon my little brother’s face, an act that would’ve earned me a blindside backhand under normal circumstances, but the pale shock I saw there assured me his thoughts were miles from my flashlight beam. I followed his gaze.

The carnage wasn’t confined to the area near the Geocache box. No, a war had erupted in the forest. Our lights shone off trees shattered mid-trunk, great furrows ripped into the earth, and blood painting it all like a living fungus.

My eyes refused to stray from the unfathomable amounts of blood splashed across the land before me. “Goddamn, Mike, I hope you at least held your own,” I whispered.

A scream ripped my attention from the battle site. It came from above, from the left, the right. It suffused me, burrowed into my skin and brain and fear until I knew but two simple facts. The scream was Mike’s, and it rattled with pain.

Someone spoke. It could’ve been any of them. “Guns.”

We rushed back to camp. Glock .40 cals and Ruger 9mm’s and Springfield Armory XD subcompacts—I understood none of their high-tech babble, but the clack of a fully loaded magazine slamming home, well, that I understood. I picked up a hatchet from the stack of firewood and tried to look like I belonged in this army.

Mike’s wail pounded the air again, panicked, wrought with agony. He was a tough man, old Irish tough; I’d witnessed him come out on top in more than a few bar fights. But this shriek had stripped away all the bravado and reduced his voice to that of a child facing the monster under his bed for the first time.

Brent slid a cartridge into his Glock’s handle and said, “Do we stick together or split up?” His face was steel.

“I think we’re armed enough to split up,” Brody said. He pointed to me and my brothers. “You three take that way, we’ll go this way.” He dictated directions.

I turned to gauge my brothers’ opinions, but Mark was already sprinting back into the woods, his pistol swinging at his side. It looked natural, organic, an extension of his flesh and bone. Brent and I followed him, our headlamps keeping him in sight, leaving Brody, Zeke and Dan behind.

We plunged into the woods. The sounds of nature at midnight vanished beneath our gasping breath, the furious crunching of our boots over dead leaves and branches. It was like hurtling through a vacuum, a tunnel devoid of any sensation not linked to adrenaline and fear. Even the beams from our lights were flat, illuminating so little that our faces slammed into the ground more than once as conniving roots grabbed at our ankles. Only when my hand wiped blood from my eyes did I realize that branches had been whipping across my face.

I stopped in a clearing, bent over gasping, and cursed the pack of American Spirits I’d inhaled the previous night. “Hold up, guys,” I said. “Let’s figure out where we . . .”