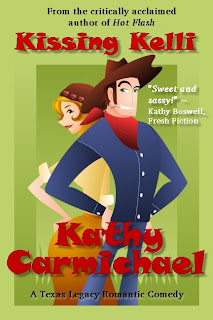 It had been three days and Kelli couldn’t seem to get the irksome cowboy out of her mind. Of course, his many phone calls might have had something to do with that.

She’d tried to remain busy by concentrating on her animal patients and by cleaning out her closet at home, but no matter what, she couldn’t get the cowboy out of her mind. When she’d checked with her receptionist mid-morning, she learned Bobby Gray hadn’t called today. She’d said, “Good riddance,” but now she wondered.

Why hadn’t he called?

Bobby Gray was giving up awfully easily. If Kelli had been intent on wooing a man—say, him—she wouldn’t have given up after a few phone calls. She’d have considered it a challenge.

But then, that was the thing about her. She wasn’t at all ladylike. She was determined. She was stubborn. And she enjoyed hard work more than she liked shopping.

Carefully carrying the small rabbit back into the examination room, she nodded at the little girl who owned the bunny. “Peter’s fine. Only had a little indigestion and dehydration.”

The child answered with a huge, gap-toothed smile as she clasped her bunny into her arms. “Thankth Docthor.”

Kelli turned to the girl’s mom. “You do know that Peter is short for Petunia, right?”

“Oh, no,” answered the mother with a distressed expression on her face.

“Oh, yes. You’ll want to bring her back for a pre-natal checkup in three weeks.”

Using lay-person jargon, Kelli explained that the bunny would have her litter of babies within a couple of weeks.

Even the girl’s mother wasn’t all that unhappy. She smiled at the bunny and gave it a quick pet.

Kelli led them out to the waiting area and headed toward the next examination room, where someone was waiting with a—she checked the chart—sick kitten.

She clicked open the door, and stopped in her tracks. The cowboy in question stood there with one of the scrawniest and most active gray tabbies she’d ever seen.

Bobby Gray’s face looked like someone had Sharpied eight thin, red stripes down it, but on closer observation, she suspected the kitten had meted out some feline discipline. Bobby Gray badly needed it, if you asked her.

“Look, cowboy. I didn’t return your calls for a reason. I’m not interested.”

He held his free palm to his chest. “Can’t you see I’ve got a dying kitten on my hands?”

The kitten’s eyes were clear and alert. She glanced down at the chart, but didn’t see anything there to indicate the animal was in jeopardy—other than being in the cowboy’s possession, that is. He had probably brought the kitten in simply to get some time with her.

Some tiny part of her, perhaps her latent girlie-girl, was gratified that Bobby Gray hadn’t given up. She liked persistence as a general trait, but it was a bad idea in his case because Lori wouldn’t like what might develop between the two of them.

Kelli needed to send the man on his way, but couldn’t resist first pointing out that she was onto his game. “The kitten may be a little skinny, but she looks healthy. I bet she’s not even yours. Where’d you get her, the Humane Society?”

“I’m very attached to my kitten. Come here, Dolly.” He pointed to his chin and the kitten licked it.

“So maybe Dolly knows you, but I’m not the only vet in the DFW area.”

“The only vet I know,” he lowered his voice, “and trust.”

She wouldn’t laugh. He was sooo bad. He was like dealing with a cute snake-oil salesman, if there was such a thing. Yet, at times she saw the man he could be lurking beneath the Stetson, and that was dangerous to her peace of mind. “What are your kitten’s symptoms?”

“She’s turned into an attack kitten. Watch a minute—you’ll see.”

He twitched his fingers in front of the tabby, and the kitten raised her back and hissed. Bobby Gray grinned at Kelli expectantly while the kitten danced on the examination table. Too cute.

Not the loopy cowboy.

Thanks! I hope you enjoyed the excerpt.